My father was not an ordinary man. Therefore, his body’s passing away is immaterial, for his thoughts were non-material. They were ethereal and eternal. As long as there is goodness in the world, he lives on, as he was the epitome of goodness- something that anyone who knew him would gaily testify, for I have not known a single person who hated him- even by an inch. To those who knew him, he was a spectacle. As a dear one rightly put it, “His presence equaled the presence of ten men.”

To him, there was no evil in the world. He saw everyone as an equal, and found something likable even in the most evil. This, to most was incomprehensible. They thought that he was gullible, which he was not. He was above those mundane qualities of the mortal world that we are so full of. He was closer to the divine than to humans, and that perhaps made the divine want his presence so badly.

In the Bhagavadgeetha, Krishna describes pure souls as [12.4-12.20] those who have their senses under control (he was on a tasteless diet for more than three years, yet enjoyed his food more than we do), who are even minded (he did not cringe when the worst of sorrows that a man can witness hit him, nor did he let some of his greatest victories empower his ego), those who spend their lives in the welfare of fellow beings (he joyously parted away with all of his life’s earning to help those who sought his help), those who hates no being (he wished well being to the worst of humans that I have seen- those that hurt him a lot, including his brother), those that are compassionate to all (I have seen him pay tuition fees to tens of students who couldn’t afford it, even when it was difficult for him to pay his own bills), those that are ever friendly (the fact that his friends outnumbered relatives while he was hospitalized testifies that), those freed from the thought of I and mine (I have not once see him buy anything for his own-not once), those who consume happiness and sadness alike (not once did he seem perturbed about the worst calamities of his life or about the glories that life bestowed on him).

Krishna continues, he who is ever content, who doesn’t afflict the world nor is afflicted by the world, he who is free from joy, anxiety, anger and fear, he who neither rejoices nor hates nor grieves nor desires, who is the same to a friend and a foe, to whom honour and dishonour are the same, who is content with anything and is detached, who is same in cold and heat, pleasure and pain is a true devotee of mine.

And that he absolutely was. Krishna also says that it is such a devotee that is dear to him, and shall free him of the cycles of birth and death. It is mortals who fear death- as they die with their bodies. But to those who lived through their life, life is eternal- in the companionship of the Lord. In the world of the liberated- The Vaikuntha. 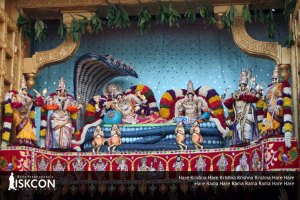 The Nammalwar episode teaches us that when it is certain that a soul gets liberated, it is not a grievous incident. But on the contrary, its a joyous pastime of the lord- a festival!

There was so much of foreshadowing to this occasion that we witnessed a miracle almost every single day of the last fortnight I spent with him.I had decided to visit a temple every evening. I got to do keetan at the legendary Srinivasa Govinda temple late in the night, after closing time (to my disappointment the temple was closed by the time I made it there) right in the sanctum sanctorum because a highly influential guy decided to turn up to have darshan. The next day, in the Raghavendra Swami temple, the archaka gave me his shloka book pleased with my devotion. I got to light more than a hundred lamps on the last day of Kartika in the Shankar Mutt, as there wasnt anybody else to do that service. At the Govardhana Giri temple, even though the temple was closed, I was let in by the force of this saintly guy who liked my keertan and let me perform a private keertan for the lord late in the night! And on one day when I was angry that I could not have the darshan of the lord as it got late due to relatives, our vehicle was stopped by a cart-festival of the lord for fifteen and odd minutes! It was as though the Lord himself decided to turn up as I couldnt go see him.  At eleven thirty in the night I was able to visit a temple because they had forgotten to lock the front gates and lo, I even get to light lamps there. On the final day, I entered the temple just when the Shringar Arati for Prahlada Narasimha started at the ISKCON Bangalore temple.

We had been informed by the doctors that it was just a matter of time, but a miracle followed a miracle until the grand one- when my father made his journey to his father.

Scriptures say that there are three fathers in a man’s life- the father who gives him birth,guru- the spiritual father and the Lord- the eternal father. So to say that I have lost my father is meaningless. I wont say that.
And so shouldn’t you. Yes- you. I am moved when you feel sad for me, but trust me- I am not sad. We were prepared for this occasion a month ago when he suffered his second arrest. I have had my share of crying, my share of missing him. Moments before he passed away, he did something that was no short of a spectacle considering that he was unable to do any physical movement. As usual I was trying to make him physically active by trying to get him do some hand moves and postures. But I had failed until that day when he decided to give me a thumbs up, and felt my cheeks and forehead for minutes at a stretch, full of love.

I know that he is around for sure. Because he is in me: mentally and physically. So all I have to do meet him is to stand in front of a mirror. So I am alright. The only request I make is to just be as you were with me before you read this.

The scriptures mandate that for someone who lived the way he lived like, the way of a renunciate, funeral services should be different. So having known the procedure, I have rendered services to him as befitting to a sannyasin, and not as a householder’s. So all those who have had a problem with that, you are more than welcome for a debate with me, with a learned scholar moderating it-and not your ego of being an elder by age doing it. I might come across as rude with this statement, but my family has faced a lot of anguish because of such people.

My father was a man of people. He gave everything that he had to anyone- undiscriminating of who that person was. So it was only correct that his body was useful after his death. Therefore, we donated his body to the KIMS for teaching and research purposes. It was a decision that my mother took a fortnight earlier having fully known that my father liked his body to be used after his passing on. He lived like a kalpataru- a desire tree. So even in death, he proved useful to the society he held so dear to him.

And it was not against the rituals that those who opposed it mindlessly believed in. When a brindavan is built for such an enlightened body, it is mummified using salt petre. A donated body is embalmed, which is as good as mummification in a brindavan. And all the rituals until that moment, including his clothing of saffron was performed by me. Yes I did not follow the rituals done for a grhastha, a householder for he was not one. The Bhagavatam says that even a grhastha who is detached is a sannyasin. And if you don’t agree that he was one, like most around him you have misunderstood him. He was indeed a right man in the wrong world. He is at a befitting place for a soul like him. And is at peace.

Dear father,
If I have erred in my statements, I beg you and the Lord for forgiveness.
If there is one thing that I can never be, is be you.
You’ve set the standards sky high. 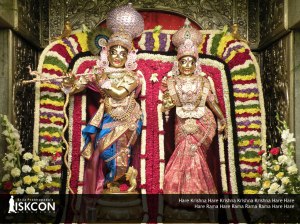